Livelihood Down the Drain

This blog was developed as part of the Voices of Youth blogging internship assignment requirement. Views expressed here are those of the author's and do not necessarily represent or reflect the views of UNICEF. 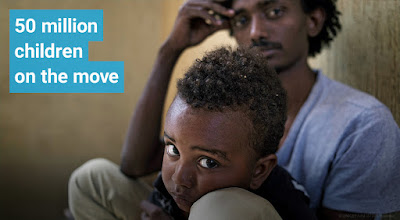 Haim Ginott, a child psychologist, once said, ‘’Children are like wet cement. Whatever falls on them makes an impression.’’  For children living in the midst of war, they are taking the brunt of a war they did not ask to be a part of. And I believe their fast growing minds are the ones most damaged by war.
About three weeks ago, I came across ‘’This child is the cost of war in Syria’’ on social media. The video footage was so graphic, so touching that it brought me to tears. This little boy Omran, at an age of probably less than five years old, was sitting still in an ambulance, with dusty clothes and a bloodied face. At one point of the video, he gently touched the left-side of his face and looked at his hand. He wasn’t crying- instead, he had this neutral look on his face, showing how shocking the situation was for him.


But it isn’t just Omran. Around 50 million children around the world have been displaced due to conflict and migration. Currently in the most war-prone countries such as Syria, Iraq, South Sudan, the Central African Republic and Yemen; around 21 million are impact by direct violence. And I started to imagine...what it must be like, to be an innocent child victim of war.
I imagined myself as a six year old waking up one day to the sound of people panicking and yelling. The walls of my house started to crack and the ceiling started to fall off. A block of cement fell on my uncle; there he laid, lifeless on the floor, blood all over him. My mom ran to me and carried me down the stairs of my two-storied house. I could see the terror in her eyes. Downstairs, my aunt and grandma were on the ground, dead.  When we made it outside, my mom gently dropped me down and said, ‘’I’m going to go back in and get your brother and sister out too.’’ But the moment she rushed back inside, I heard multiple gunshots, the ones I’ve only heard on television. The whole scene blinded me, until the next thing I knew, my mother laid on the dusty road, in a pool of blood. Struck by the shock and terror of the sight, I fainted .
I opened my eyes and everything around me was on fire; it was all gone down in ashes. And my mother - was nowhere to be seen. I touched my forehead; I looked down at my palm and it was covered in blood. My clothes too were covered in blood, and ashes. I couldn’t stand up nor move -  a big block of cement fell on my left foot. I screamed for help but there were no answers. Another four hours passed before a group of red-uniformed men rushed to get me out from under the block of cement. The pain in my left foot told me that it was broken. They then carried me to an ambulance nearby and I was taken to a strange place, which I later found out was a rescue center. As I sat in the corner, I stared blankly at the crowd in front of me; children, adults, babies, all injured and crying in pain. The shock was still there, yet, thoughts started to come into my head and I realized that my family was  no more. There I was, a child with a broken leg and no family. The thought of ‘’I’m lucky to be alive,’’ never came; I’d lost too much in that split  second.
As I had this vivid imagination, I started to think about all those children who lost their livelihood, their precious childhood during war. They would be carelessly forced into strange refugees camps, where they wouldn’t be provided with enough water or food. Their souls are placed in those camps, as they’ve forgotten that normal life even existed. Even if they do remember, they’re not even sure  if normal life will ever resume.
For them, the war will remain as a lifelong scar, a nightmare that could never be forgotten. At these young ages, these children are supposed to sing and dance to those cliché children songs at school and repeat them when they get home. They’re supposed to call their friends over just to spend hours building legos or watching cartoon. They’re supposed to run around and ride on the swings at the playground until the sun sets. The only nightmare they deserve is the first day of school, nothing more than that. Yet, all they hear everyday is the sound of bombs and death.


Those children would also lose their education opportunity due to war. If they would ever make it to the future, extra time would be needed for them to gain the knowledge they should’ve gradually gotten when they were a child. A child disabled in war, would live their future life without what they were originally born with. The memory of war would linger in their minds, traumatizing them for the rest of their lives. A child who lost his family would have to grow up without motherly love, without the warmth that a child needs. These precious lives would never be able to attain the full potential they would’ve had if war never came in between them and their childhood.
Posted by UNICEF Cambodia