How much can you do with clean water?

KAMPONG CHAM, Cambodia, 6 May 2015 – At Kokor Primary School, children are eager to use their newly raised well to water their cherished vegetable garden. “Since the well has been rehabilitated and elevated, we don’t need to worry about the rainy season anymore,” explains Lorn Leang Heng, Kokor Primary School director. The school well is one of the 275 wells rehabilitated across Cambodia as part of a joint European Union, UNICEF and government initiative to strengthen preparedness and build resilience in flood-prone areas.


Older kids children run to the top of the 2-level well and start pumping water, while younger ones gather around the tap on the ground level and start passing around buckets and watering cans. “Having two water points means that, while the bottom one is under water when it floods, the top one remains dry can still be used,” continues Lorn Leang Heng. “When the 2013 flood hit, the well was completely submerged: it took two weeks for the water to go down!” he adds.

Children help water the plot and pick the vegetables. Spinach, salad and morning glory (a type of water spinach popular in Southeast Asia) are all grown at the school and eaten together by students and teachers come harvest time. “What I like the most? Pumping the water!” says Man Manit, an 11-year old female student.


“Every year this area is subject to flooding,” explains Tong Phal Long, chief of Kokor commune. “After the floods in 2013, some of us continued to use the wells in the village but had several diarrhoea cases. We needed the wells to be chlorinated and repaired; we needed clean water,” adds Tin Sen, chief of Kokor 2 village. “Now people have started using village wells again: they feel more confident to do so because they see less disease caused by contaminated water”, he concludes.

In Kokor 2 village, four out of a total of five wells have been rehabilitated (with one being raised), benefiting a total of 1,582 people. In most households, well water is used for cooking, bathing and washing; 50 per cent of villagers use it for drinking as well, after boiling it or using a water filter (the remaining 50 per cent buy it from water provider).


“Rehabilitated wells are good for children’s health and all household activities, including a small vegetable garden” explains Yin Saron, 53, mother of 7 and a farmer of chili, maize and rice. “If the well was broken, I would have to go to the nearest pagoda to get water, one kilometre away from here; during the rainy season the area is flooded so I would need to take a boat,” she adds. “It is expensive and difficult for the community to mobilise the money for well repairs: the rehabilitation UNICEF and the EU delivered helped us a lot,” Yin concludes with a smile. 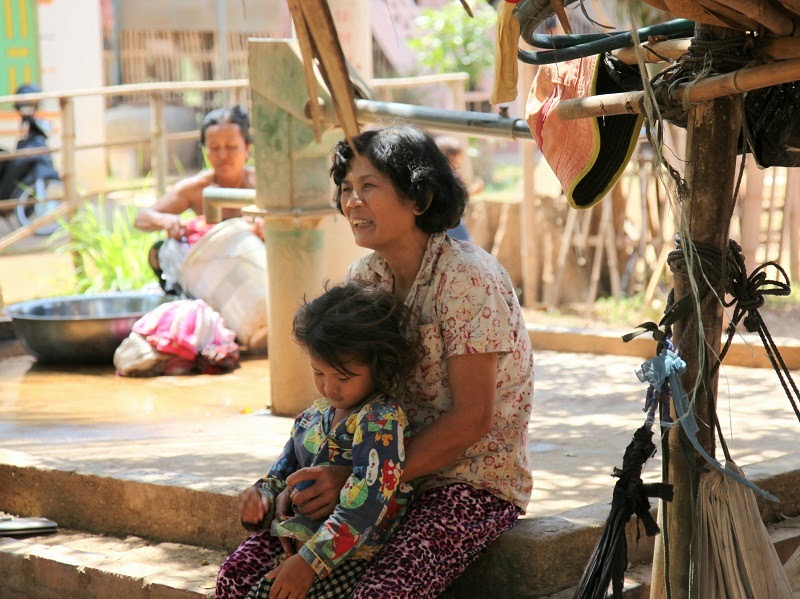 © UNICEF Cambodia/2015/Martina Tomassini
Yin Saron, 53, (here with her granddaughter), is one of the beneficiaries of the rehabilitation and chlorination of wells in Kokor village 2, Kampong Cham province.

In September and October 2013 several parts of Cambodia were severely affected by flooding, leaving many rural water supplies unusable and unsanitary. Unclean water and lack of sanitation and hygiene are one of the leading causes of diarrhoea – one of the preventable diseases that kill an estimated 2,300 children in Cambodia every year.

With funding from the European Commission’s Humanitarian Aid and Civil Protection (ECHO), UNICEF joined forces with the Cambodian Government to reduce the risk of water-borne diseases for vulnerable children and their families, during and after a flood emergency. Rural development teams have been trained in proper well chlorination and disinfection, as well as equipped with basic equipment and supplies to undertake well rehabilitation.

Carried out in five different provinces throughout Cambodia, this initiative has also supported the training of community members in basic sanitation and hygiene, and has taught sub-national officials how to map wells with a user-friendly mobile app on tablets and smartphones. Some 98,000 households in flood-prone areas are expected to benefit from the initiative.